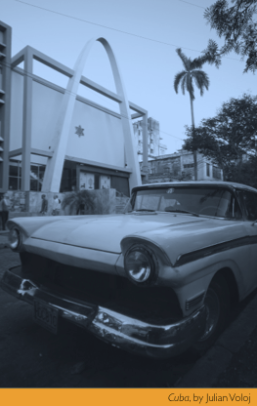 Doors open at 6 to view the Faith & Form art exhibit.

Join award winning photographer Julian Voloj for a discussion and presentation on Jewish émigré communities from around the globe.

As part of Faith & Form, the current Jewish Art Salon exhibition at The Anne Frank Center USA, the German-born photographer and writer Julian Voloj will present an illustrated talk exploring themes inherent to his work. For over two decades Voloj has documented Jewish diaspora and Jewish heritage sites in countries as diverse as Cuba, Lithuania, and Morocco. His portrait photography includes depictions of African-Americans who adopted Judaism in an attempt to foster identity; Hasidic Jews recreating Eastern European shtetls in the heart of Brooklyn; World War II veterans from the former Soviet Union, as well as B’nai Anusim reclaiming their heritage.

Documenting Diaspora is a unique opportunity to view the highlights of Julian Voloj’s remarkable portfolio, and to learn more about the diverse Jewish communities he photographs. The discussion will be followed by a Q&A and a reception.

This presentation and discussion will focus on global diaspora, diverse community development, life under varied political rules, challenges, struggles, and celebrations. Julian will share anecdotes, personal thoughts, and ofcourse his remarkable photo portfolio, all leading us to question what it means to be Jewish today.

Program made possible through COJECO‘s Center Without Walls, sponsored by the UJA-Federation of NY, and Genesis Philanthropy Group.

RJeneration: Born in the Soviet Union, Made in the USA is a social group for Russian-speaking Jews 25-40 years of age. It offers Shabbat dinners, social gatherings, literary readings, and film screenings to address the diverse needs and interests of its community.

Tags: Anne Frank Center, COJECO
← RECREATING THE GOLEM: From Prague to The Simpsons
COMIC BOOKS AND THEIR CREATORS: lecture / workshop →