Artist Archie Rand took on a very ambitious project: he painted all 613 Jewish commandments. These images have been published in a book “The 613 by Archie Rand”, which will be published November 10th by Blue Rider Press. More publication info here. 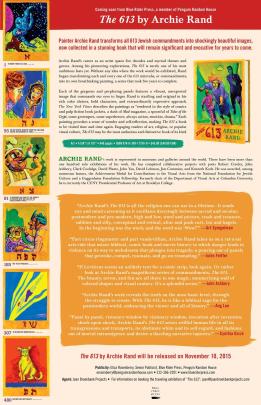 Archie Rand’s career as an artist spans five decades and myriad themes and genres. Among his pioneering explorations, The 613 is surely one of his most ambitious feats yet. Without any idea where the work would be exhibited, Rand began transforming each and every one of the 613 mitzvahs, or commandments, into its own breathtaking painting, a series that took five years to complete.
Each of the panels features a vibrant, unexpected image that brings forth the heart of its law and commands our eyes to linger. Rand is startling and original in his rich color choices, bold characters, and extraordinarily expressive approach. The New York Times describes the paintings as “rendered in the style of comics and pulp fiction book jackets, a dash of Mad magazine, a spoonful of Tales of the Crypt, some grotesques, some superheroes, always action, emotion, drama.” Whether grotesque or dramatic, each painting provokes a sense of wonder and self-reflection, making The 613 a book to be visited time and time again. Perfect for readers of art, religion, or popular visual culture, The 613 may be the most audacious and distinctive gift book of its kind.
“Archie Rand’s The 613 is all the religion one can use in a lifetime–It sends eye and mind careening as it oscillates dizzyingly between sacred and secular, postmodern and pre-modern, high and low, word and picture, trash and treasure, sublime and silly, conceptual and retinal, altar and push-cart, lox and bagels. In the beginning was the word, and the word was ‘Wow!’ ” –Art Spiegelman

“Part circus ringmaster and part vaudevillian, Archie Rand takes us on a rat-a-tat arts-ride that mixes biblical, comic book and movie history in which danger leads to violence on its way to melodrama that plunges into tragedy; a pouring out of panels that provoke, compel, resonate, and go on resonating.” –Jules Feiffer

“If Leviticus seems an unlikely text for a comic strip, look again. Or rather look at Archie Rand’s magnificent series of commandments, The 613. The beauty, terror, and fun are all there in one magic, mesmerizing wall of colored shapes and visual oratory. It’s a splendid series.” –John Ashbery

“Archie Rand’s work reveals the truth on the most basic level, through the struggle to create. With The 613, he is like a biblical sage for the postmodern world, embracing the viewer and all of history.” –Ang Lee

“Panel by panel, visionary window by visionary window, invention after invention, shock upon shock, Archie Rand’s The 613 seizes willful human life in all its transgressions and transports, its obstinate whim and its self-regard, and fashions out of mortal intransigence and desire a dazzling narrative tapestry. Rand’s serious wit of riotously colorful contemporary comic-book art applied to Commandments, as it morphs into a seamless mural, rings out with the ironic and iconic underground teasing of ‘thou shalt not’ simultaneously luring us to a half-Socratic, half-Biblical KNOW THYSELF.” –Cynthia Ozick

Tags: 613, Blue Rider Press
← Evil: A Matter Of Intent
The Divine and Sublime with Carole Kunstadt →