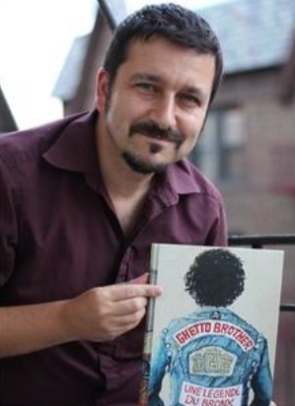 Mr. Voloj will be present to discuss his work and sign books.

The LES Live Jewish Book Club is a collaboration between Tamid: The Downtown Synagogue and the Manny Cantor Center. tamidnyc.org mannycantor.org

An engrossing and counter view of one of the most dangerous elements of American urban history, this graphic novel tells the true story of Benjy Melendez, a Bronx legend, son of Puerto-Rican immigrants, who founded, at the end of the 1960s, the notorious Ghetto Brothers gang. From the seemingly bombed-out ravages wracked by drugs, poverty, and violence, he managed to extract an incredibly positive energy from this riot ridden era: his multiracial gang promoted peace rather than violence. After initiating a gang truce, the Ghetto Brothers held weekly concerts on the streets or in abandoned buildings, which fostered the emergence of hip-hop. Melendez also began to reclaim his Jewish roots after learning about his family’s dramatic crypto-Jewish background.

German-born photographer and writer Julian Voloj explores identity and heritage in his work. He has been featured in a variety of newspapers and magazines such as The New York Times, the Washington Post, and the Jerusalem Post. His award-winning work has been exhibited in museums and galleries around the globe including the Deutsch- Historisches Museum (Berlin), the Bronfman Center at NYU, and the Queens Museum of Arts (New York). In 2012, the German Consulate, New York, showed a ten-year retrospective of his photography titled “Only in New York.” In 2010, he photographed the former gang leader and Crypto-Jew Benjamin Melendez. The two became friends and Julian decided to turn his life into a graphic novel, Ghetto Brother. The book, illustrated by Claudia Ahlering, has been published in English, Spanish, German, French, and Portuguese.

JAS OPEN STUDIOS ZOOM PROGRAMS CONTINUE!
Yesterday we celebrated Tu B’Av, the 15th day of the month of Av, a time when mourning is turned into renewed hope and celebration. It is both an ancient and modern holiday. It marks the beginning of the period of spiritual preparation leading up to the month of Elul and the Days of Awe.
Tomorrow! Tuesday, July 6, 12 PM New York, 11 AM Chicago, 9 AM PT, 7 PM Jerusalem
Growing Up Jewish in India, edited by Ori Z. Soltes, features artwork by @sionaware The book, which will be released soon, offers an historical account of the primary Jewish communities of India, their synagogues, and unique Indian Jewish customs. It offers an investigation both within Jewish India and beyond its borders, tracing how Jews arrived in the vast subcontinent at different times from different places and have both inhabited dispersed locations within the larger Indian world, and ultimately created their own diaspora within the larger Jewish diaspora by relocating to other countries, particularly Israel and the United States.
"Cholent Is the Delicacy that the Lord Revealed to Moses". Image by Mark Podwal in "Hebrew Melodies", which the @Jewishreviewbooks calls "a treasure. Article here: https://jewishreviewofbooks.com/jewish-history/11059/dionysus-and-the-schlemiel/
The Jewish Art Salon is excited to partner with The Israelite Samaritans Project of the @yeshiva_university Center for Israel Studies in the creation of a unique exhibition, "The Samaritans: A Biblical People", which explores the Samaritans, their complex culture and religion, and their relationships with Jews, Christians and Muslims across time.
Tuesday, June 15, 12 PM New York, 11 AM Chicago, 9 AM PT, 7 PM Jerusalem
After the Flood ReGenesis.
Rachel Braun
Praying for Peace in Israel. Oil painting by @artwork_by_leah
Woman of Valor, Valeriya Khomar, Mixed media on canvas, 2019. @artvaleriyakhomar #happymothersday❤️ #motherhood #motherart #jewishart #jewishartsalonmembers
Chana Zelig @artistchanazelig
With immense sorrow, The Jewish Art Salon extends condolences to the families of the deceased, and prays for the speedy recovery of all the injured in Meron Thursday night.
Shabbat Shalom! Havdalah, Ali Shrago-Spechler, challah bread, steel, wooden dowels, 2016. @alishragospechler
Let it Burn, photograph, Yehudis Barmatz Harris @yehudisb.h "Fire is vital and also consuming, as are the teachings of the Kabbalah. "
Chesed Sha be Hod, Loving kindness in humility. From Judith Margolis' book on the Omer. Today marked the second Passover, for those who missed the Passover offering. It reminds us to give ourselves a second chance.
Shabbat Shalom! Alef-Bet poster, by Cindy Lutz Kornet. @artsoul18
"Loving-kindness in Endurance" From @st.soleil Judith Margolis' artist book on the Counting of the Omer. For anything to endure it needs to be loved. Day 22 of the counting of the omer.
VIDEO: Creativity in an Uncertain Time IX at https://youtu.be/JTouLXee-WI
Creativity in an Uncertain Time aired April 12, 2021.
©2021 Jewish Art Salon. All Rights Reserved. Email: jewishartsalon@gmail.com Mailing address: Jewish Art Salon 1392 Madison Avenue, UPS Box 192, New York, NY 10029-6914 USA
Loading Comments...
%d bloggers like this: