On February 4th, 2016 the Women’s Caucus for Art will hold the award ceremony at its annual conference at the National Museum of Women in the Arts, in Washington, DC.

On February 6, 2016 there will be a special evening with Helene Aylon participating:

7-8pm Group Exhibition Open to Public
Video documentation of Helène Aylon’s facade installation Bridge of Knots will be shown at the very same museum where it was installed in 2006.  It will be screened as an ongoing loop.
This exhibition, IMPACT – Legacy of the Women’s Caucus for Art 1972-2016, will be on view January 23 – March 13, 2016. 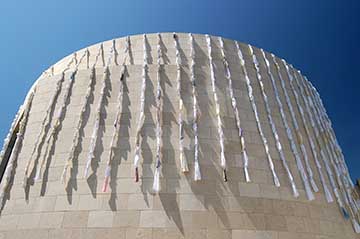 Tags: American University Museum, Bridge of Knots, Women's Caucus for Art
← Letters from my Grandparents: The Art of Ruth Schreiber
Symposium on Femininity and Masculinity in Jewish Art →