A solo exhibition of new work by Susan Schwalb, pioneering American artist of contemporary metal point drawing features abstract, linear compositions of mixed metalpoint on colored surfaces, many of which introduce the artist’s new investigation of absence or the void as a constructive element. 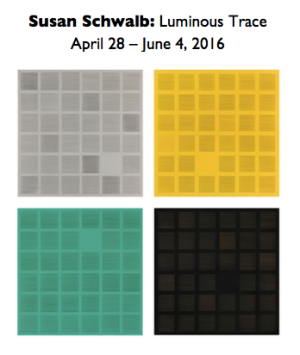 The Opening Reception will take place on Thursday, April 28, 6-8pm. The artist will be present. The exhibition will run from April 28 – June 4, 2016

Luminous Trace, the artist’s 12th solo show in New York, will take place at Garvey Simon. Susan Schwalb’s primary medium for the past four decades is the technique of mixed metalpoint drawing. Her work creates the effect of an abstract universe composed of lines and reflections of light. Schwalb works in series; each new body of work is an evolution from the previous cycle. Many of these works on paper and panel combine metalpoint on vibrant tinted surfaces that enhance and change the perception of the metallic hues. The artist uses a wide variety of metals (silver, gold, brass, copper, platinum, pewter, bronze and aluminum) to obtain soft shifts of tone and color. The metallic shimmer of light on the surface invites closer observation in raking light. Horizontal lines evoke an atmosphere of serenity.

This exhibition introduces a new element in Schwalb’s oeuvre: the void. Building upon her past Polyphony series, Luminous Trace also reveals parallels between Schwalb’s drawing practice and music. Like music, Schwalb’s work is abstract. Each rendered line is akin to a single note in a musical score: combined they create a harmonious composition. The three series represented in Luminous Trace are Harmonizations, Quartet, and Intermezzo. Her husband who is a classical composer tangentially influences the musical titles.

Narrow metalpoint lines form an even grid of 36 separated squares that form the basic structure and serve as a spatial context for irregular events on the surface. Harmonizations offers a deeper focus on the square, the format on which she has almost exclusively worked since 1997. The multitude of separated squares introduces the void or emptiness here for the first time as metaphor for a new presence or the mourning of loss. 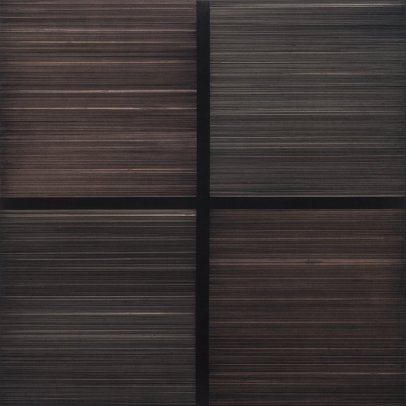 Quartet uses four equal squares as the compositional basis, as in many of the Polyphony paintings of her last show. In these, each individual square is composed of its own varied types of light-reflecting lines, adding movement to the surface.

Diagonal lines divide the picture plane in the series entitled Intermezzo as many different metalpoints are combined with metallic wool pads and graphite. Some of these works have a three-dimensional quality as surface events are continued on the sides of the panel. 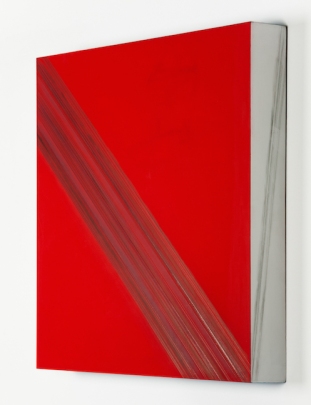 A native New Yorker, Susan Schwalb was born in 1944. She received her BFA from Carnegie-Mellon University in 1965. Her work is exhibited widely, both nationally and internationally, including over 35 solo exhibitions. She was the only female, and one of just three living artists to be included in the recent history-making metalpoint exhibition at the National Gallery of Art in Washington, DC (Drawing in Silver and Gold: Leonardo to Jasper Johns (2015); traveled to The British Museum, London). Her work is in major public collections, including the Museum of Modern Art, New York; The Metropolitan Museum of Art, New York; the National Gallery of Art, Washington DC; The British Museum, London; The Brooklyn Museum, NY; Kupferstichkabinett – Staatliche Museen zu Berlin, Germany; Victoria and Albert Museum, London; and The Ashmolean Museum, Oxford, England.

Metalpoint is a writing and drawing technique which flourished during the High Renaissance until replaced by graphite in the late sixteenth century. Traditionally, a small metal wire is used to make precise marks on a prepared surface or paper. The ‘points’ can be of varied types of metal: from silver to gold, to copper or tin. Silverpoint is the best known and most often used. The initial marks of metal appear grey, but when exposed to air the metals oxidize and tarnish to varying degrees, adding an element of time and chance to the medium.