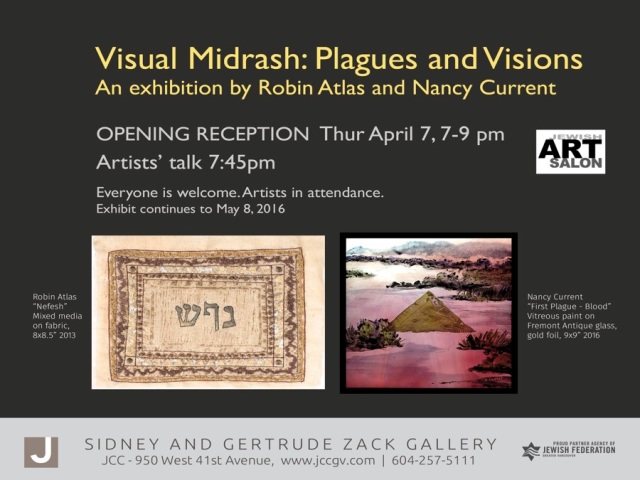 The ten plagues are generally understood to be God’s wrath visited on Egypt through progressively more horrific calamities, ultimately causing Pharaoh to release the Jewish people from enslavement. While this is the central theme of the story, the plagues evince more nuanced wonders from the hand of God.  The story begins in the Book of Genesis with the chronicles of the Patriarchs, starting with Abraham and continuing through the families of the sons of Jacob, the twelve tribes of Israel. The Book of Genesis ends the with death of Joseph, who had become the Pharaoh’s chief lieutenant. After forgiving the betrayal of his brothers, Joseph was able to secure the Land of Goshen as a new homeland for the children of Israel in Egypt, where they multiplied and prospered.

In the Book of Exodus, we see the children of Israel evolve from an extended family to a “People”. After the death of Joseph, and the Pharaoh he served, the new Pharaoh felt threatened by the presence of “the People of the Children of  Israel”, who had increased and prospered  so that “the land (of Egypt) was filled with them.” (Ex. I: 7-9).   The Pharaoh enslaved them, both as protection from their increasing numbers and to profit from their forced labor. At the end of Exodus Chapter II, God hears the wailing of the Children of Israel and sets in motion the events that ultimately lead to their deliverance.

The ten plagues were not randomly inspired; God’s message was truly deliberate.  The Egyptians were idolaters; they worshipped the Nile River, the sun, and a host of beasts, including insects. By design the plagues attacked  the pillars of Egyptian orthodoxy –  the Nile was turned  to blood, darkness smothered the sun, and exalted beasts were annihilated by disease and extreme natural forces. The plagues were also intended as “signs and wonders” through which God would  become “known” in the land, by both Egyptians and Israelites, as the one and singular almighty God. In the end, Pharaoh’s belief in his own omnipotent godliness was shattered. All of Egypt was punished for its inhumanity, and Egyptian theology was humbled in the face of the God of the Children of Israel.

Midrashic interpretations of the ten plagues are legion and varied. This exhibit of visual midrashim offers the story of the ten plagues through original imagery expressed through the  creative use of different mediums.  The artists welcome you to connect anew with the wonder of the stories told, and hope that you will appreciate the unique artistic voice that narrates them.

Mark Podwal is “Jew of the Week” on the latest @unorthodoxpodcast ( Ep. 302 “Safe and Sound”) by @tabletmag Interview starts at 35 minutes.
Happy Tu B'Shvat tonight! SHEVAT- AQUARIUS by @cbrubinstudio and @yona_verwer .
We are thrilled to be selected as part of the 2022 CANVAS networks grant cycle! CANVAS is a funding and field-building collaborative that seeks to encourage, support and promote a 21st-century Jewish cultural renaissance. Image by @Sionaware, member of the Jewish Art Salon
Holy Sparks pairs artists with 24 woman rabbis to illuminate the creativity, commitment, and vision of women who were “firsts” in their time. Their challenges and contributions, struggles and successes, represent the achievements of all women rabbis since June 3, 1972, when Rabbi Sally Priesand was ordained by Hebrew Union College-Jewish Institute of Religion as the first woman rabbi in America.
Holy Sparks pairs artists with 24 woman rabbis to illuminate the creativity, commitment, and vision of women who were “firsts” in their time.
Parsha Vaera: JAS artist member David Wander and Professor David Kraemer will talk about their studies on this parsha as part of the @theameninstitute Fellowship.
Happy 2022! “Jewish Time” by @markpodwal, his illustration from the Mishkan HaNefesh for Youth (CCAR Press), which is a prayer book for the Jewish New Year and Yom Kippur.
Shabbat shalom! CALL for ART: The TZEDEK BOX Project.
@ebilsk discussed the exhibition "The House is in the Book" at Sunday's zoom session. This @jerusalembiennale exhibition at the @jerusalemprintworkshop features JAS artists @andi_arnovitz & @mirta_kupferminc , as well as @lynneavadenka
Yesterday's zoom session featured curator @dvoraliss who showed artworks by @sarisrulovitch in the @jerusalembiennale 2021.
In our zoom session today @ramiozerijrm discussed the @jerusalembiennale 2021. In this fascinating presentation about the Jewish Art Salon artists at the JB, we also heard from curators Dvora Liss and Emily Bilski. More about those presentations later.
THE SAMARITANS: A BIBLICAL PEOPLE, edited by Steven Fine.
Posted @withregram • @judithjosephstudio
Join us Sunday December 26: JEWISH ART SALON MEMBERS AT THE JERUSALEM BIENNALE 2021, a special zoom presentation with Rami Ozeri @ramiozerijrm Founder/Director of the @jerusalembiennale , and curators Emily Bilski @ebilsk and Dvora Liss @dvoraliss
Aaron Rosen, Director of the @luceartsandreligion (and also our Advisor) at our Calligraphy zoom session last Sunday. Curator @jdhomie_letters gave a fascinating presentation of his unique exhibition VISUAL MUSIC: CALLIGRAPHY & SACRED TEXTS AMONG JEWS AND CHRISTIANS. Together they discussed the contemporary #calligraphic art featured in the exhibition.
@jdhomie_letters presented today at our Zoom session. "VISUAL MUSIC: CALLIGRAPHY & SACRED TEXTS AMONG JEWS AND CHRISTIANS", is an exhibit he curated at the @luceartsandreligion under the auspices of its director Aaron Rosen. Here Homrighausen compares Hebrew calligraphy with Japanese Zen calligraphy.
Shabbat shalom! Inspired by Parshat Vayigash ויגש by @ellenholtzblatt for @theameninstitute with @bronwenmullin
"The Song of Eve" inspired by Parshat Vayeshev וישב by @richardmcbeeart for @theameninstitute
Wishing a happy and fruitful "Zot Chanukah" Trns "This is Chanuka", when the full eight lights glow in all their glory.
LIVING LIGHTS by @moullyart
©2022 Jewish Art Salon. All Rights Reserved. Email: jewishartsalon@gmail.com Mailing address: Jewish Art Salon 1392 Madison Avenue, Ste 192 New York, NY 10029-6914 USA
Loading Comments...
%d bloggers like this: