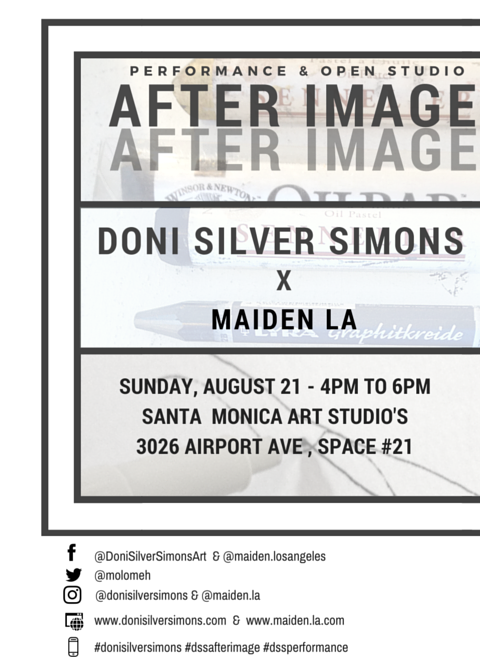 Each visitor  is invited  to mark the wall of the artist’s studio. Silver Simons will remove the marks to the best of her ability, leaving only “afterimages” behind.

For over a decade, Silver Simons’ interactive and durational performances have been shown throughout Southern California. After Image, which explores temporal relationships and communal memory, is the most recent of her participant driven experiences.

Maiden LA was created and organized by two Los Angeles-based artists, Molly Schulman and Salomeh Grace. Using the Hammer Museum’s biennial as a jumping off point, Maiden LA (a playful anagram and homophone of ‘Made in LA’) stemmed from a desire to connect LA based artists, organizations and their respective communities, while bringing attention to the number of artist run initiatives throughout the city. The collaborative duo was interested in the concept of a Los Angeles survey as being one that considered the city as a platform for generative discourse and exchange, and one that would encourage unrealized projects to take form

Coinciding with two LA Biennials, the Hammer Museum’s MADE IN LA exhibition and CURRENT: LA WATER a city-wide initiative, MAIDEN LA is a county-wide network of Art Happenings that will take place during the month of August 2016. Support for Maiden LA is provided by Common Field, a national network of experimental and non-commercial contemporary art spaces and projects, Velaslavasay Panorama, and Curate LA.