Samantha Baskind, Professor of Art History, Cleveland State University, and Advisor to the Jewish Art Salon, curated three exhibitions on Jewish themes at the Galleries at CSU, Cleveland, Ohio, opening September 1st. The anchoring show will be the entirety of Archie Rand’s series Sixty Paintings from the Bible, not seen together since 1992, the year it was completed. 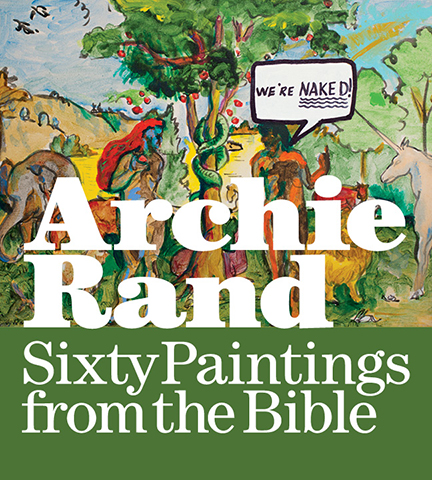 “Archie Rand is widely recognized as the most innovative and prolific painter on Jewish themes today,” notes Samantha Baskind. “Yet at the same time his themes are universal. Rand’s Sixty Paintings from the Bible series is not didactic religious art, but a post-modern artistic conception that demonstrates how the Bible’s archetypal stories delineate basic human emotions and issues such as power, faith, humility, sexuality, and family dynamics. We are so pleased to have the opportunity to showcase Rand’s art at CSU.”

Baskind wrote a 180 page hardcover catalog to go with the show that includes all 60 paintings as full-page color plates. A smaller Archie Rand exhibit,  the complete fifteen painting series, “The Book Of Judith” (2012) will also be on display.  Also available will be a color catalog, published by CSU for this exhibition that will include essays by Curator Samantha Baskind and Director Robert Thurmer.

Rand will be speaking on the evolution of the painting and the book, “The 613” (Blue Rider/Penguin/Random House, 2015), at Case Western Reserve University, in Cleveland, on August 31 and then will be presenting a lecture at Cleveland State University, on September 1, immediately before the opening reception for the show.

Archie Rand has been producing art for nearly 50 years and has been awarded a Guggenheim Fellowship and made a Laureate of the National Foundation for Jewish Culture. He has had over one hundred solo exhibitions and his work is housed in the permanent collections of numerous museums including the Metropolitan Museum of Art, the Victoria and Albert Museum in London, and the Bibliothèque Nationale de France in Paris.

The Galleries fall exhibit additionally includes To Speak Her Heart by noted printmakers Leslie A. Golomb and Barbara Broff Goldman. This group of works on paper considers different types of Jewish women’s devotional literature, beginning with the biblical figure of Hannah and journeying throughout the land of Israel and the Jewish diaspora.

More info on the exhibits here