“Bridging the Gap between Cultures: A Syrian Jewish Artist in Jerusalem” mentions that Cohen is in Jerusalem as the first ever artist-in-resident supported by the Jerusalem Biennale for Contemporary Jewish Art. By bridging the gap between Judaism and art, it is attempting to do what Cohen does with her proverbs. The event is part of the Biennial foundation, an international arts organization providing advocacy and thought leadership by supporting art events, like the Jerusalem Biennale, all over the world. 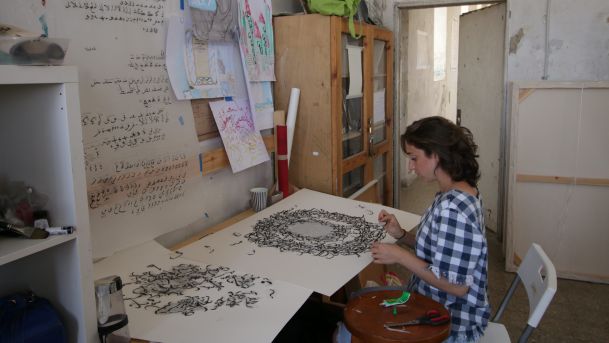 Cohen takes ancient Arabic proverbs that her father used to read to her and reworks them to apply to modern life. These popular phrases were used by her Syrian community for hundreds of years, but have fallen out of use. Cohen keeps a running Google document with all of the phrases, which she constantly updates with new notes as she ruminates on the phrases until she deciphers their deeper meanings, which then, often, inspire a work of art.”

Haaretz also mentioned Lenore in the article Fifteen Ways of Looking at the Old City.

The work of Lenore Mizrachi-Cohen, an artist in residence from Brooklyn who is here with her family, is also being featured. Brought here on a pilot program by Biennale founder Rami Ozeri, she told Haaretz she is “working on a series that combines scenes all over Jerusalem with Arabic calligraphy.” She said she is drawing on her Syrian roots, incorporating elements such as a diploma of her grandfather’s from Aleppo.

"Every Protection" , @debraolin7 exhibit at the @museumateldridgestreet until April 2022. Inspired by S. An-sky, author and researcher of Jewish folklore and tradition.
Shabbat shalom! "Shalom Y’all: A Snapshot of Southern Jewish Life Photographs and Memories" from @billaron.photography and @vickireikes . Currently on view at the Museum of the Southern Jewish Experience in New Orleans.
There are 48 ways to receive the Torah; Linda Altabef's linocut prints represent the theme Clarity, part of an invitation to 48 artists by @kolhaot Linda presented her works today in our Zoom Open Studio series dealing with works made during COVID.
@brombachershoshannah presenting at today's Zoom Open Studio.
“An Atlas of Jewish Space” with a text by leading Holocaust scholar Robert Jan van Pelt and 139 of @markpodwal ’s pictures.
Join us! Sunday, October 10, 12 PM New York, 11 AM Chicago, 9 AM PT, 7 PM Jerusalem
Wishing a Happy Sukkot Holiday.
Today's JAS Open Studio Zoom meeting: @ef4art's 3-d artwork "The Writing on the Wall".
Today's JAS Open Studios on zoom: @gabriellaboros series "Rage of the Matriarchs". Featured here: Sarah.
With the end of Yom Kippur, a Great Tekia is blown from the Shofar, and then we wish each other a Good Year.
Join the Jewish Art Salon as we continue a dialogue to explore the artistic process behind the work of three contemporary artists. In this session artists @ef4art , @gabriellaboros and Sandra Indig explore the process of re-creation: the deposits and richness of creativity that emerge from desolation and despair.
Last Sunday's JAS Zoom presentation featured @joelsilversteinart who showed us his exciting and totally original oeuvre based on biblical themes; contemporary look at the visual tradition of the epic and the evocation of the sacred. The artist’s family, friends and other autobiographical material are the inspiration for a complex Magic Realism. This creates an overlapping sense of myth derived from such diverse sources as dreams, cinema, Old Master painting, photography and comic books.
Last Sunday's JAS Zoom presentation by @jkejake whose antropomorphic art merges animals and figures in collages and streetart. His surrealistic art source late 19th century images.
Last Sunday's zoom presentation: Diana Kurz's artwork on animal rights through a Jewish lens.
Today at 4:30pm ET! Explore the exciting connections between art and architecture, ancient and modern, spiritual and utilitarian, and learn how transforming the environment through art and architecture creates change for societies and individuals.
The Jewish Art Salon wishes everyone a Sweet New Year, a year blessed with health, safety, and opportunity.
Sunday, September 5, 12 PM New York, 11 AM Chicago, 9 AM PT, 7 PM Jerusalem Our next live session AFTER THE FLOOD: ReGENESIS.
"Jewish Art Salon Zoom" painting, 8 by 8 inches, by @artwork_by_leah featured in her Jewish Art Salon presentation last Sunday .... on Zoom.
JAS OPEN STUDIOS ZOOM PROGRAMS CONTINUE!
Yesterday we celebrated Tu B’Av, the 15th day of the month of Av, a time when mourning is turned into renewed hope and celebration. It is both an ancient and modern holiday. It marks the beginning of the period of spiritual preparation leading up to the month of Elul and the Days of Awe.
©2021 Jewish Art Salon. All Rights Reserved. Email: jewishartsalon@gmail.com Mailing address: Jewish Art Salon 1392 Madison Avenue, UPS Box 192, New York, NY 10029-6914 USA
Loading Comments...
%d bloggers like this: