With 136 works from 28 institutions and private lenders, this exhibition explores the rich fate of the Golem figure in the visual arts, through a journey that combines painting, drawing, photography, theater, cinema, literature, comics and video games. From the presentation of a remarkable Sefer Yetsirah (“Book of Creation”) printed at Mantua in 1612 to the screening of excerpts from Terminator 2, works by Boris Aronson, Christian Boltanski, Mark Podwal, Gérard Garouste, Antony Gormley, Philip Guston, Amos Gitai, RB Kitaj or Anselm Kiefer, the exhibition shows how this medieval Jewish legend still operates today in a globalized imagination. 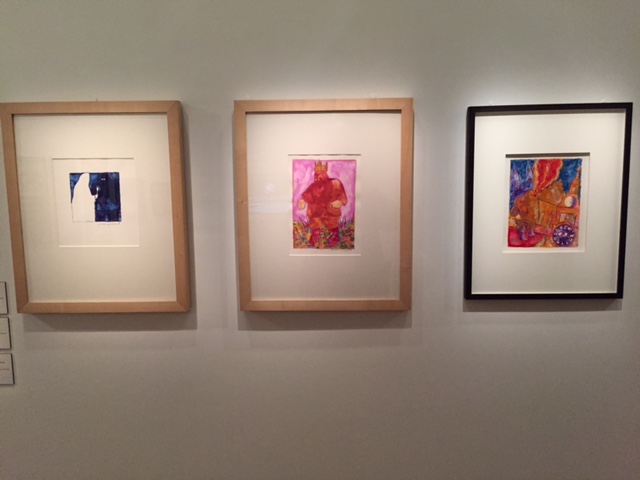 Mark Podwal’s art in the Golem exhibition in Paris

Being clay animated with sacred letters, the Golem is one of the most famous Jewish myths and one of the major figures of fantasy literature. The one whom one is accustomed to represent in the guise of a giant with superhuman powers has never ceased to fascinate and endorse many meanings over time.
In the Middle Ages and then in the Renaissance, it is an entity known only to the mystics, who debate magical operations to bring it to life. In the 19th century, the Golem became a popular figure: a creature designed to relieve the Jewish community of hard work and to protect it from persecution. But many stories insist on the episode where this being turns against Rabbi Yehuda Loew, its creator, and it is at this moment that the first images of the Golem are born. In 1915, Hugo Steiner-Prag gave him a Mongoloid and disturbing expression in the illustrations of Gustav Meyrink’s famous novel, and Paul Wegener gave it, in his film of 1920, features that will last a long time the image of the twentieth century. The legend of Golem fascinates artists, who see it as a metaphor for their position as creators in the face of an inert matter to which “give life”. From the outset, they emphasize the character’s ambivalence: to be miraculous and monstrous at the same time, it oscillates between humanity and inhumanity, between protection and threat.
The plasticity of the myth of the Golem is at the origin of most artificial creatures, imaginary or real, and its fertile progeny continues to grow, especially in the field of robotics and computer science. A precursor to superheroes and digital avatars, the Golem is also a figure that allows us to think of a world where man might lose control over his inventions.

Happy Tu B'Shvat tonight! SHEVAT- AQUARIUS by @cbrubinstudio and @yona_verwer .
We are thrilled to be selected as part of the 2022 CANVAS networks grant cycle! CANVAS is a funding and field-building collaborative that seeks to encourage, support and promote a 21st-century Jewish cultural renaissance. Image by @Sionaware, member of the Jewish Art Salon
Holy Sparks pairs artists with 24 woman rabbis to illuminate the creativity, commitment, and vision of women who were “firsts” in their time. Their challenges and contributions, struggles and successes, represent the achievements of all women rabbis since June 3, 1972, when Rabbi Sally Priesand was ordained by Hebrew Union College-Jewish Institute of Religion as the first woman rabbi in America.
Holy Sparks pairs artists with 24 woman rabbis to illuminate the creativity, commitment, and vision of women who were “firsts” in their time.
Parsha Vaera: JAS artist member David Wander and Professor David Kraemer will talk about their studies on this parsha as part of the @theameninstitute Fellowship.
Happy 2022! “Jewish Time” by @markpodwal, his illustration from the Mishkan HaNefesh for Youth (CCAR Press), which is a prayer book for the Jewish New Year and Yom Kippur.
Shabbat shalom! CALL for ART: The TZEDEK BOX Project.
@ebilsk discussed the exhibition "The House is in the Book" at Sunday's zoom session. This @jerusalembiennale exhibition at the @jerusalemprintworkshop features JAS artists @andi_arnovitz & @mirta_kupferminc , as well as @lynneavadenka
Yesterday's zoom session featured curator @dvoraliss who showed artworks by @sarisrulovitch in the @jerusalembiennale 2021.
In our zoom session today @ramiozerijrm discussed the @jerusalembiennale 2021. In this fascinating presentation about the Jewish Art Salon artists at the JB, we also heard from curators Dvora Liss and Emily Bilski. More about those presentations later.
THE SAMARITANS: A BIBLICAL PEOPLE, edited by Steven Fine.
Posted @withregram • @judithjosephstudio
Join us Sunday December 26: JEWISH ART SALON MEMBERS AT THE JERUSALEM BIENNALE 2021, a special zoom presentation with Rami Ozeri @ramiozerijrm Founder/Director of the @jerusalembiennale , and curators Emily Bilski @ebilsk and Dvora Liss @dvoraliss
Aaron Rosen, Director of the @luceartsandreligion (and also our Advisor) at our Calligraphy zoom session last Sunday. Curator @jdhomie_letters gave a fascinating presentation of his unique exhibition VISUAL MUSIC: CALLIGRAPHY & SACRED TEXTS AMONG JEWS AND CHRISTIANS. Together they discussed the contemporary #calligraphic art featured in the exhibition.
@jdhomie_letters presented today at our Zoom session. "VISUAL MUSIC: CALLIGRAPHY & SACRED TEXTS AMONG JEWS AND CHRISTIANS", is an exhibit he curated at the @luceartsandreligion under the auspices of its director Aaron Rosen. Here Homrighausen compares Hebrew calligraphy with Japanese Zen calligraphy.
Shabbat shalom! Inspired by Parshat Vayigash ויגש by @ellenholtzblatt for @theameninstitute with @bronwenmullin
"The Song of Eve" inspired by Parshat Vayeshev וישב by @richardmcbeeart for @theameninstitute
Wishing a happy and fruitful "Zot Chanukah" Trns "This is Chanuka", when the full eight lights glow in all their glory.
LIVING LIGHTS by @moullyart
Light (2019) by @sandraencaoua – Watercolor on Art Paper.
©2022 Jewish Art Salon. All Rights Reserved. Email: jewishartsalon@gmail.com Mailing address: Jewish Art Salon 1392 Madison Avenue, Ste 192 New York, NY 10029-6914 USA
Loading Comments...
%d bloggers like this: