Benjamin “Yellow Benjy” Melendez has passed away. His extraordinary life as a Latin gang leader in the Bronx, who transformed his life upon discovering his family’s Converso roots, was uniquely captured by Julian Voloj.

Selections of Voloj’s award-winning graphic novel Ghetto Brothers: From Warrior to Peacemaker were curated by Yona Verwer into an exhibition by the Jewish Art Salon in 2011 at New York’s Columbia / Barnard Kraft Center. More info on the exhibition here.

Yellow Benji was instrumental in creating the early 70’s Hoe Avenue Peace Treaty. The treaty was important in stopping the street gang wars in the Bronx.

Benji and Julian Voloj helped create the 45th Anniversary of this Treaty, which was a backbone to the movie the Warriors. 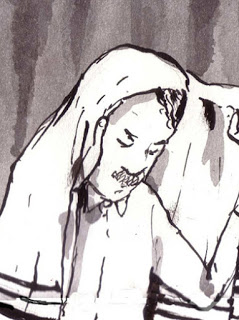 Tags: Graphic Novel, Warrior/Peacemaker
← What We Forgot: A solo show of work by Lenore Mizrachi Cohen
Call for Art: GOLEM, An Artist’s View →

Yesterday we celebrated Tu B’Av, the 15th day of the month of Av, a time when mourning is turned into renewed hope and celebration. It is both an ancient and modern holiday. It marks the beginning of the period of spiritual preparation leading up to the month of Elul and the Days of Awe.
Tomorrow! Tuesday, July 6, 12 PM New York, 11 AM Chicago, 9 AM PT, 7 PM Jerusalem
Growing Up Jewish in India, edited by Ori Z. Soltes, features artwork by @sionaware The book, which will be released soon, offers an historical account of the primary Jewish communities of India, their synagogues, and unique Indian Jewish customs. It offers an investigation both within Jewish India and beyond its borders, tracing how Jews arrived in the vast subcontinent at different times from different places and have both inhabited dispersed locations within the larger Indian world, and ultimately created their own diaspora within the larger Jewish diaspora by relocating to other countries, particularly Israel and the United States.
"Cholent Is the Delicacy that the Lord Revealed to Moses". Image by Mark Podwal in "Hebrew Melodies", which the @Jewishreviewbooks calls "a treasure. Article here: https://jewishreviewofbooks.com/jewish-history/11059/dionysus-and-the-schlemiel/
The Jewish Art Salon is excited to partner with The Israelite Samaritans Project of the @yeshiva_university Center for Israel Studies in the creation of a unique exhibition, "The Samaritans: A Biblical People", which explores the Samaritans, their complex culture and religion, and their relationships with Jews, Christians and Muslims across time.
Tuesday, June 15, 12 PM New York, 11 AM Chicago, 9 AM PT, 7 PM Jerusalem
After the Flood ReGenesis.
Rachel Braun
Praying for Peace in Israel. Oil painting by @artwork_by_leah
Woman of Valor, Valeriya Khomar, Mixed media on canvas, 2019. @artvaleriyakhomar #happymothersday❤️ #motherhood #motherart #jewishart #jewishartsalonmembers
Chana Zelig @artistchanazelig
With immense sorrow, The Jewish Art Salon extends condolences to the families of the deceased, and prays for the speedy recovery of all the injured in Meron Thursday night.
Shabbat Shalom! Havdalah, Ali Shrago-Spechler, challah bread, steel, wooden dowels, 2016. @alishragospechler
Let it Burn, photograph, Yehudis Barmatz Harris @yehudisb.h "Fire is vital and also consuming, as are the teachings of the Kabbalah. "
Chesed Sha be Hod, Loving kindness in humility. From Judith Margolis' book on the Omer. Today marked the second Passover, for those who missed the Passover offering. It reminds us to give ourselves a second chance.
Shabbat Shalom! Alef-Bet poster, by Cindy Lutz Kornet. @artsoul18
"Loving-kindness in Endurance" From @st.soleil Judith Margolis' artist book on the Counting of the Omer. For anything to endure it needs to be loved. Day 22 of the counting of the omer.
VIDEO: Creativity in an Uncertain Time IX at https://youtu.be/JTouLXee-WI
Creativity in an Uncertain Time aired April 12, 2021.
Shabbat Shalom! Tehilim pour les vivants (2018) – Sandra Encaoua – Oil & spray on canvas.
©2021 Jewish Art Salon. All Rights Reserved. Email: jewishartsalon@gmail.com Mailing address: Jewish Art Salon 1392 Madison Avenue, UPS Box 192, New York, NY 10029-6914 USA
Loading Comments...
%d bloggers like this: