Archie Rand in the media

Rand’s opening remarks for “The 613”, his exhibition at The Contemporary Jewish Museum, are featured on Vimeo here.

In addition Rand was interviewed by Raul Gallyot of KWMR radio in San Francisco, where he was asked a couple of curve ball questions that pertain to the aesthetics of the painting. Interview available here.

Much of Rand’s work involves paintings in reaction to essential Jewish texts; these are not illustrations but are emotional and intuitive responses. Rand is deeply aligned with contemporary poetry, having collaborated with a number of major experimental poets such as John Ashbery and Robert Creeley. Rand sees the cumulative historic gift of Jewish textual scholarship as his inheritance to interpret and utilize for his own aesthetic practice. His use of the 613 is not therefore to be understood as an endorsement of its content but as a respectful reuse of found material.

Peter Steinfels in The New York Times of June 7, 2008, wrote, “The 614 individual paintings—an introductory “title painting” pictures a man in a fedora, presumably taking orders from God on a 1930s-style wall phone—are rendered in the style of comics and pulp fiction book jackets, a dash of Mad Magazine, a spoonful of Tales From the Crypt, some grotesques, some superheroes, always action, emotion, drama.” The palette runs to lurid blues, greens, yellows, purples and rose, “vulgar, discomforting colors,” Rand says, suitable for the acrylic paints but also “to steer away from an accepted aesthetic.” The wall of images is held together not only by the style and the palette but also the formal gold edging of each painting with the Hebrew number of the commandment.

The 613 by Archie Rand is organized by The Contemporary Jewish Museum, San Francisco and Joan Brookbank Projects in collaboration with the artist Archie Rand.

Blue Rider Press (Penguin Random House) published a hardcover book of 640 pages, reproducing each of the 613 panels (one full-color plate per page) in 2015. The book features endorsements by Art Spiegelman, Cynthia Ozick, and Ang Lee, among many other writers, artists, and critics. Available at Amazon here. 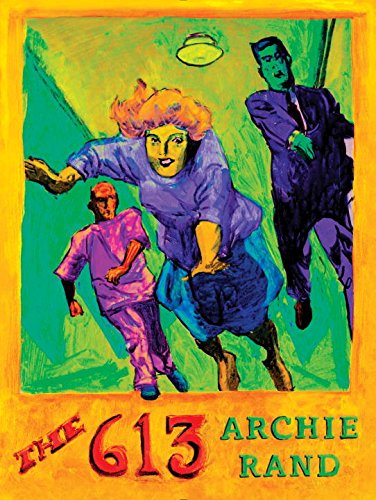 More information about The 613 exhibition can be found here.