September 2, 2018 · by jewishartsalon · in Uncategorized

One of the Jewish Art Salon’s founding members, Laura Kruger, curator, will be honored Doctor of Humane Letters, honoris causa at the renaming of the HUC’s museum in New York.

The event will also mark the opening of the exhibition TERRA inFIRMA, in which many Jewish Art Salon members have artwork.

“TERRA inFIRMA” focuses on climate change and global warning through the lens of Jewish values and contemporary social activism.

Laura Kruger, Museum Curator, explains, “According to our tradition, God created the earth and we are instructed to tend it and preserve it for future generations. It is our responsibility as the earth’s stewards to take action and effect positive change.”

The 65 international artists featured in this exhibition seek to express their concern by sharing their responses to a broad range of challenges: 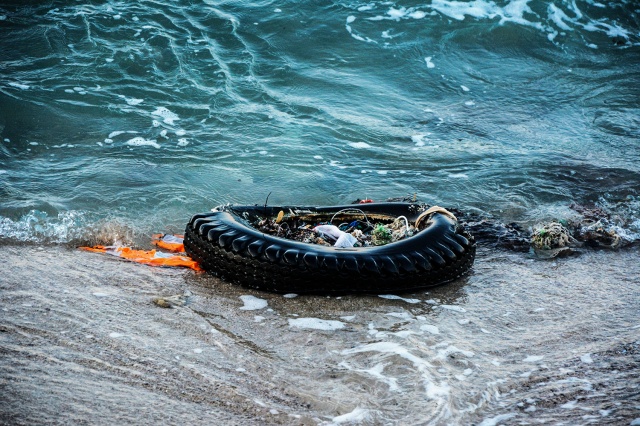 According to Rabbi David Adelson, D.Min., Dean of HUC-JIR’s New York Campus, “Jewish environmental action today to reverse climate change is our sacred opportunity and an act of faith.”

Works ranging from photography and painting to mixed media sculpture and lithography evoke a diverse array of imagery and subject matter.

The devastation of our waters and by flooding is evoked in a number of works, including images of a submerged Manhattan by Aileen Bassis and David Newman, Mark Berghash’s algae-ridden Central Park ponds, the fragile melting glaciers in works by Marcia Clark and Tobi Kahn, the polluted seas depicted by Dorit Jordan Dotan and Paul Weissman, and Tamar Hirschl’s and Barbara Hines’ apocalyptic works.

Destruction by wildfires are chronicled by Pat Berger and Noah Berger, while Jeffrey Brosk utilizes a fragment of a charred tree from such fires as the material for his sculpture.

Other artists employ the earth’s natural and polluted materials for the creation of work, including Gorgos Giotsas use of tree resins and twigs, John Sabraw’s use of toxic acid from abandoned coal mines, and Jeffrey Schrier’s use of wasp nests from the Indian Point Power Plant vicinity.

Endangered and “indicator” species monitoring the health of ecosystems appear in the imagery of Deborah Kruger, Allen Hart, and Andrew Paul Leonard’s micrograph photographs of phytoplankton.

The erosion of natural resources are reflected in Roei Greenberg’s cautionary photograph of the Dead Sea, Larry Frankel’s experiential photograph conveying the vanishing country landscape, Grace Graupe-Pillard’s warning of the poisoning impact of fracking, and Rochelle Rubinstein’s critique of corporate depletion of acquifers.

New ritual objects are proposed by Ken Goldman’s “Rain Gauge” and Rhoda London’s “The Corners of the Field” tzedakah box, echoed by Archie Rand’s paintings of the 240th and 279th commandments to replenish the earth and leave some of the field’s harvest for the poor.

Human intervention to effect positive change can be seen in Dare Boles’ depiction of women utilizing alternative energy in rural cultures, Cali Gorevic’s photograph of windmills as a source of energy, Elizabeth Downer Riker’s painting of urban roof-top green spaces, Moses Pini Siluk’s photograph of drip irrigation, and Flora Rosefsky’s textile glossary of agencies working to save the planet. Our society’s responsibility to overcome all of these challenges is powerfully expressed by Deidre Scherer’s evocation of diverse ethnic, gendered, and aged hands holding up our world. 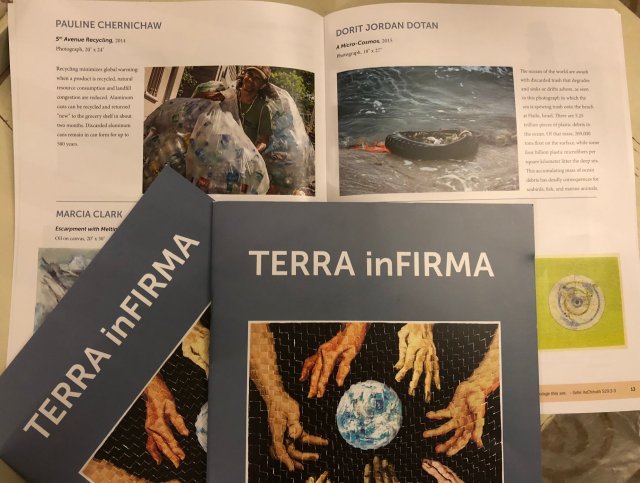 Jean Bloch Rosensaft, Museum Director, states, “As an art museum embedded within a leading institution of Jewish higher education and seminary, our mission is to engage contemporary artists, our students and faculty, and the larger community in exploring how Jewish text and tradition relate to the critical issues of our times and to educate our campus community and visitors of all faiths to take action. The visual arts reinforce our institutional commitment to fulfill the values of tikkun olam, the healing of our world.”