The exhibition “Through Compassionate Eyes: Artists Call for Animal Rights” was curated by Mr. Silverstein and his wife, Julie Seidman, with the sponsorship of the Jewish Art Salon and Jewish Veg.

Running from October 7 through November 2 at the Charter Oak Cultural Center in Hartford, Conn., the exhibition deals with the conjunction of environmentalism, veganism, animal rights, and Jewish thought.

Vegans do not consume any products that come from animals, including not only meat but also eggs, dairy, and bees’ honey, foods that vegetarians usually eat.

As far as Mr. Silverstein knows, this is the first show of its kind, and it is meant to spur viewers to deeper levels of social thought and action. Not all of the artists who were chosen to participate in the exhibition are Jewish (or vegan), nor were all of the works created to address Jewish themes. The overall idea, however, is to demonstrate the Jewish textual tradition regarding animal cruelty, ecology, and veganism.

“This art exhibit is very important and we’re thrilled to be part of it,” Mr. Cohan, director of Jewish Veg, said. “The Jewish world has never seen an exhibit like this. It’s really groundbreaking and the quality of the artwork is just off the charts. It’s a powerful way to communicate this message.”

“We believe this show is at the cutting edge of Jewish culture,” Mr. Silverstein said. It could be displayed elsewhere in the future if another venue were to express a commitment to the theme, he added. 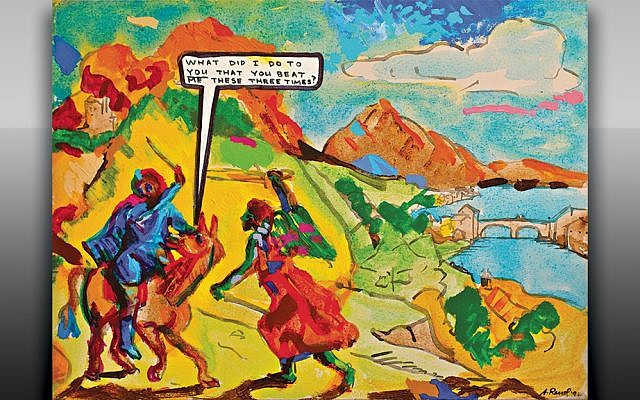 Archie Rand’s painting illustrates the biblical story of Balaam beating his donkey for knowing too much.