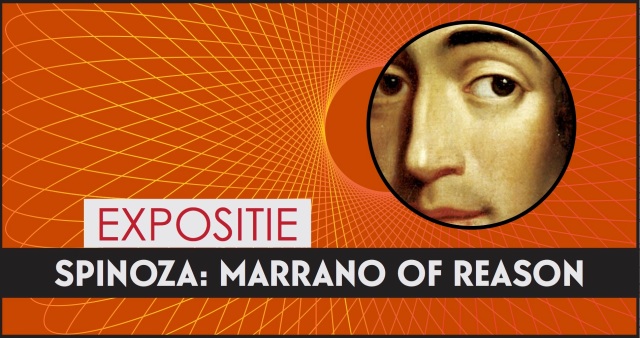 Spinoza, whose ancestors had fled the Inquisition for the Netherlands, had a traditional Jewish upbringing, but as a young adult came to believe that human beings should live their lives guided by reason. A brilliant introvert who did not seek to impose his ideas on others, Spinoza’s ideas nevertheless shook the world and were considered so heretical, so deviant, that he was excommunicated for life from Amsterdam’s Jewish community. Today, he is remembered for rejecting divine transcendence in favor of rationality, a concept that paved the way for the Enlightenment. The exhibition’s title refers to Spinoza and Other Heretics: The Marrano of Reason  by scholar Yirmiyahu Yovel.

An essay by Ori Z. Soltes, professor of Theology and Fine Arts at Georgetown University, will accompany the exhibition. Gallery Talks, Walking Tours, and a Concert will be held in conjunction with the exhibition.

Janet Heit is a New York-based curator known for bringing emerging artists into the cultural mainstream. She is a prior Helena Rubinstein Fellow in Museum Studies and past recipient of an NEA Grant for Art Criticism. Curator Billha Zussman is an Israeli-Dutch artist with a longstanding interest in Spinoza. She works at Amsterdam’s Jewish Historical Museum.

This exhibition is being made possible in large part thanks to a very generous individual who wishes to remain anonymous, and the International Movers Network.

The Amstelkerk is a former church, built between 1668-1670, and served the inhabitants of the newly built outer circles of the canals. Plans to rebuild the wooden church into a stone one were never completed, so to this day the Amstel Church is still a wooden structure. The church is managed by Stadsherstel, which restores and preserves monuments. The building features monthly art exhibitions, concerts and lectures.

Plein van Siena is a center for study, reflection, encounter and spirituality in Amsterdam-Zuid. They want to emulate an open, inviting, atmosphere in the spirit of Dominicus, Catherine of Siena and Thomas Aquinas. They regularly present exhibitions of contemporary visual artists, and activities around culture, philosophy, theology and humanity.

Wishing a happy and fruitful "Zot Chanukah" Trns "This is Chanuka", when the full eight lights glow in all their glory.
LIVING LIGHTS by @moullyart
Light (2019) by @sandraencaoua – Watercolor on Art Paper.
Giant 20 Ft shiny menorah by @thehillelsmith , full of holiday words. New candles added every day. Los Angeles.
Chanukah Menorah, terracotta, 16"x16"x4", by @levcostudio
Groundbreaking exhibit Maktoub, with Israeli and Emirati calligraphers, curated by @lenorecohen (Jerusalem) and @chamamechtaly (Dubai).
The Miracle Menorah by @thehillelsmith is bi-lingual, showing the word “Light” in English when viewed from one side and the Hebrew word “Hanukkah” when viewed from the other.
Hanukkah - Night/Day #1 by @cheselynamato By patience, pace, trust, equanimity, positive anticipation and forthright action, so begins the yearly and cyclical demonstration that what we need and want can and does unfold before us! The Hanukkah ritual particularly highlights that the “enough” we may need does show up in the nick of time. When on a brink, when much is at stake, gaps become bridged, quantities extend beyond expected breadths. Sometimes, we have enough without realizing it. We can be resourceful solution-makers. We can sometimes change the terms of our needs and wants. We can sometimes change and re-shape our tools, materials and methods to enable the outcome we are seeking.
VISUAL MUSIC: CALLIGRAPHY & SACRED TEXTS AMONG JEWS AND CHRISTIANS
Happy Chanukah! WE COME BEARING (HANUKKAH) GIFTS DREIDEL by @frannaddisonjudaica
Shabbat shalom! "B'reishis 78" (Acrylic/Ink on Canvas) by Mel Brown, currently exhibited at the @jerusalembiennale
@ruth__schreiber's art in the @jerusalembiennale The exhibition "Where Do Children Come From?" is at Ramban Synagogue
@beverleyjanestewart's art in the @jerusalembiennale
Judith Appleton's art in the @jerusalembiennale , "View from studio entrance", 2019, oil on canvas, 63x95cm by @judithyehuditvideopainter
@kengoldmanart's work at the @jerusalembiennale
Shabbat shalom! @raananart's artwork in the @jerusalembiennale at the #TakeMeHome venue. (Old Shaare Zedek)
@maayan_artist 's artwork in the @jerusalembiennale
@yehudisb.h 's artwork in the @jerusalembiennale at The old Shaare Zedek | 161 Jaffa St.
Linda Altabef's artwork in the @jerusalembiennale "Squaring the Circle- Making the ineffable tangible".
@Heddybab's work at the @jerusalembiennale "Book of Shared Burdens", 2021, mixed media and found object (photo: Yaal Herman) by Heddy Breuer Abramowitz.
©2021 Jewish Art Salon. All Rights Reserved. Email: jewishartsalon@gmail.com Mailing address: Jewish Art Salon 1392 Madison Avenue, UPS Box 192, New York, NY 10029-6914 USA
Loading Comments...
%d bloggers like this: