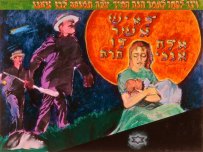 Archie Rand (born 1949) is an artist from Brooklyn, New York. Rand’s work as a painter and muralist is displayed around the world. His recent book The 613 was lauded in the NY Times.

Rand’s work is in the collections of the San Francisco Museum of Modern Art, the Art Institute of Chicago, the Victoria and Albert Museum in London, the Bibliothèque Nationale de France in Paris, and the Tel Aviv Museum of Art. His graphic works and books are in over 400 public collections including the Metropolitan Museum Of Art, The Museum of Modern Art, The Whitney Museum of American Art, The Art Institute Of Chicago, The Brooklyn Museum, The Baltimore Museum of Art, the Smithsonian Institution, and The New York Public Library; and are owned by many universities, among which are Harvard, Yale, Columbia, Brown, and Johns Hopkins.

Rand received his Bachelor of Fine Arts in cinegraphics from the Pratt Institute, having studied previously at the Art Students League of New York. His first exhibition was in 1966, at the Tibor de Nagy Gallery in New York. He has since had over 100 solo exhibitions, and his work has been included in over 200 group exhibitions.
He is currently Presidential Professor of Art at Brooklyn College. Before joining Brooklyn College, Rand was the chair of the Department of Visual Arts at Columbia University. He had served as the Acting Director of the Hoffberger School of Painting and as Assistant Director of the Mount Royal Graduate Programs, both at the Maryland Institute College of Art. From 1992-4 he was appointed Co-Chair of the National Studio Arts Program of the College Art Association and from 1998-2003 he served as Chair of the College Art Association National Committee for the Distinguished Teaching of Art Award.

The Italian Academy For Advanced Studies in America at Columbia University presented him with The Siena Prize in 1995. He was awarded a Guggenheim Foundation Foundation Fellowship in 1999 and was made a Laureate of the National Foundation for Jewish Culture, which awarded him the Achievement Medal for Contributions in the Visual Arts. In 2002 he received the Presidential Award for Excellence in Teaching from Columbia University.

In 2002 he became the artistic advisor to film director Ang Lee for his production of The Hulk, and was asked by Milestone Films to provide a commentary track for the DVD release of Henri-Georges Clouzot’s classic 1955 film The Mystery of Picasso.

Archie Rand’s earliest major works are “The Letter Paintings” (or “The Jazz Paintings”) (1968–71), a radically positioned series of technically inventive, mural-sized canvases. The Letter Paintings, by incorporating the names of mainly male and female African-American musicians, undermined prevailing aesthetic categories by conflating many contemporary movements including Conceptual Art, Color Field, Pattern and Decoration, diary entry and social commentary.
Although The Letter Paintings had been displayed individually, they were first shown as a unit in an exhibition at the Carnegie Museum of Art in 1983. Selections from The Letter Paintings have been on continuing multi-venue exhibition tours of the United States and Europe (including Palazzo Ducale, Genoa) since their Exit Art exhibition in 1991. Roberta Smith, art critic for The New York Times and a lecturer on contemporary art, described them as “exhilarating, precocious and lyric” and wrote that “Rand’s paintings demand a substantial place in the history of an unusually fertile period in American art.” Others described them as “an uncannily accurate step in the right direction”, “[a]s exhilarating as a Charlie Parker solo or a holler from Big Joe Turner”, and, almost thirty years after they had been painted, as carrying “the force of a visionary project”.
The New York Times called Rand’s first solo exhibition of abstract collaged canvases “An impressive debut”.

In 1974 Rand received a commission from Congregation B’nai Yosef in Brooklyn to paint thematic murals on the complete 16,000-square-foot interior surfaces of the synagogue. The work took three years, and completing this commission made Rand the author of the only narratively painted synagogue in the world and the only one we know of since the 2nd Century Dura-Europos. The religious legal controversy raised by placing wall paintings in a traditionally iconoclastic space was resolved by the verdict of Rabbi Moshe Feinstein, then considered to be the world’s leading Talmudic scholar, who declared the paintings to be in conformity with the law.

As Matthew Baigell has recently written, “The B’Nai Yosef murals, then, when considered in the light of…his mixture of figurative and abstract elements; his appeal to the viewer’s imagination and awareness of the artist’s sense of inventiveness, are, altogether, nothing less than revolutionary in Jewish American art….After these murals, anything became possible for Jewish-American artists.” The aesthetic demands of the B’Nai Yosef murals marked a turning point in Rand’s work. His subsequent turn to figuration may have been influenced by his friendship with Philip Guston, whose own work was transformed in the late 1960s. Like Guston, Rand “chafed at the limitations of purely abstract forms.”

In 2003 Rand did two murals for Beth El Congregation in Fort Worth and in 2005 executed the large entrance mural at Congregation Beth-El in San Antonio.[56]
In 2004, a retrospective exhibition was mounted at the Yeshiva University Museum in New York.
In 2008, on a warehouse wall, Rand mounted the painting, “The 613”, which at 1700 square feet (17’ x 100’) is nearly twice the size of James Rosenquist’s F-111. It is one of the largest freestanding paintings ever made.