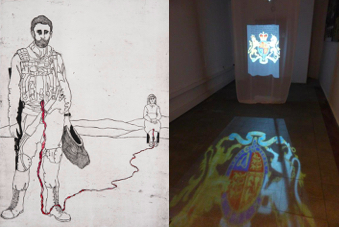 The fourth of Iyar, the day preceding Israel’s Independence Day, was declared by the Israeli parliament to be Yom Hazikaron, a Memorial Day for those who lost their lives in the struggle that led to the establishment of the State of Israel. This year it starts at sundown April 17. Andi Arnovitz created a series Mothers […]

Linda Lieff Altabef at the @kolhaot gallery in Jerusalem.
"Spiritual pixels: reconciling Judaism and NFTs - Exporting cultural richness online through the worlds of Torah and NFTs".
@hyperallergic features an article by @amy_levinekennedy on @tobikahnstudio 's current solo exhibitions.
Last Sunday at our Zoom Art Critiques: Carol Man's artworks.
Yesterday's Zoom Art Critiques: @ali.shrago.spechler's Attempt at Atonement, video shot at German Nazi theater.
TODAY! ART CRITIQUES
Sunday June 12: Last day at @81leonardgallery for the exhibition PAUSE: Jewish Heritage Month.
@81leonardgallery and Jewish Art Salon present the art exhibition PAUSE
jewishartsalon Jews around the world are finishing their Shavuot celebrations, marking the day the Torah was received as a nation.
Shavuot by @charlidraws
Our collaboration with @81leonardgallery On view for the final two weeks of “PAUSE: Jewish Heritage Month/Ways of Being” are works by Joel Silverstein and Richard McBee. Both Silverstein and McBee’s works filter biblical perspectives through a modern imagination.
At our collaborative exhibit with @81leonardgallery : Ali Shrago-Spechler’s (@ali.shrago.spechler) work considers cultural transition through the use of cardboard, a material which embodies impermanence and exchange. Using cardboard to construct various tchotchkes, photographs, ritual objects, and books pulled from her family oral history and archives pertaining to Ashkenazi Jewry, Shrago-Spechler highlights the displacement of European Jewish cultural heritage during the Holocaust on a large-scale and individual level.
@81leonardgallery Yona Verwer’s (@yona_verwer) paintings Hebban Olla Vogala 1 and Hebban Olla Vogala 2 reference the first three words of one of the earliest texts in Old Dutch, which translates, according to the artist, as “all the birds have made their nest except for you and me.” A Dutch expatriate and Jewish convert, Verwer crafts a language of recurrent symbols, including submarines representative of Jonah’s whale, to tell an ongoing story of spatial, spiritual, and cultural transition.
@dovlederberg from the series Stones of Fire, 2012.
Our exhibition at the @81leonardgallery is featured in the @canvascompend
PAUSE: Jewish Heritage Month/Ways of Being, at @81leonardgallery in collaboration with the Jewish Art Salon.
On view in the windows of @81leonardgallery until May 15th & inside the gallery for the duration of the exhibit, in addition to Orli Swergold’s Molting Street Tiles (2022), is Tobi Kahn’s RYTZA (2017).
@81leonardgallery “PAUSE: Jewish Heritage Month/Ways of Being” is officially open at 81 Leonard Gallery, in collaboration with the Jewish Art Salon.
Shabbat shalom! "Superman Breaks Time: For Walter Benjamin", 2022, 48" x 60". Based on Walter Benjamin's essay, Thesis on the Philosophy of History.
At the renowned Phillips Collection! Sunday May 8 at 2pm ET live-streamed from Washington DC - @tobikahnstudio in conversation with:
©2022 Jewish Art Salon. All Rights Reserved. Email: jewishartsalon@gmail.com Mailing address: Jewish Art Salon 1392 Madison Avenue, Ste 192 New York, NY 10029-6914 USA
Loading Comments...
%d bloggers like this: