Spinoza in Our Time

The panel will take up some of the thinking that shaped the exhibition, Spinoza: Marrano of Reason, which opened on March 7 in two venues in Amsterdam. The exhibit offers the work of a diversity of artists—from the Netherlands, the United States, Israel, and Colombia—who addressed a diversity of issues that resonate from the story of the brilliant 17th-century Dutch Jewish philosopher.

Spinoza came from a family that left Portugal during the previous century in the context of an ongoing Inquisition by the Catholic Church into heresy and proper Christian faith. From a teenagerhood as an intense student of rabbinic Judaism, he evolved to become both the father of modern Jewish thought and one of the fathers of modern Western thought, and at the same time, was the victim of a double process of excommunication for heresy and improper Jewish belief by the Sephardic rabbinate of Amsterdam.

The six panelists will then follow with brief discussions of their own work in the exhibition that addresses Spinoza in different ways. These visual ideas, in diverse media, connect the philosopher’s era to other issues and eras, including our own. The artists consider the matter of defining Jewish thought and Jewish art within the larger history of art; the issue of hiddenness (Spinoza’s era was not the only one in which Jews have felt obliged to remain hidden in fundamental ways); the matter of being a woman and a woman artist within Judaism, the West and the worlds of Jewish and Western art; and the matter of immigrants and refugees across time and space. These questions connect Spinoza to the matter of being a Jew in a Christian world, a Jewish artist in the world of art, a genius in the world of narrow minds, and a human being in the world of natura naturans and naturata. 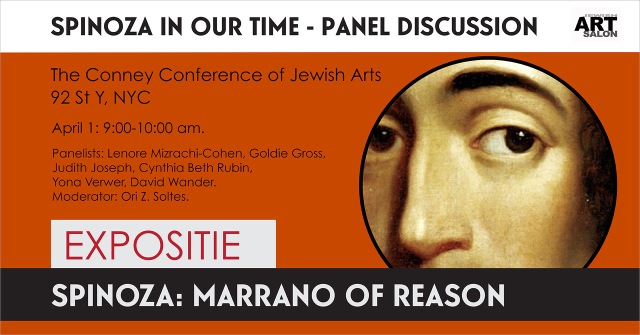 Ori Z. Soltes currently teaches theology, philosophy and art history at Georgetown University. Dr. Soltes has lectured at dozens of museums across the country, including the Metropolitan Museum of Art, the National Gallery of Art, the Smithsonian Institution, the Art Institute of Chicago and the Los Angeles County Museum of Art. For seven years, Dr. Soltes was Director and Chief Curator of the B’nai B’rith Klutznick National Jewish Museum, where he created over 80 exhibitions. Nearly 280 publications have included, among others: Tradition and Transformation: Three Millennia of Jewish Art & Architecture; and Fixing the World: Jewish American Painters in the Twentieth Century.

Lenore Mizrachi-Cohen is a mixed-media conceptual artist based in Brooklyn. She employs Arabic and Hebrew calligraphy, imagery, and light to create art that contrasts past and present cultural values. Her family heritage as a Syrian Jew is a deep well of inspiration for her work, which has been exhibited and collected in the US and abroad.

Goldie Gross is a Brooklyn born & raised artist, curator, and student. She has curated several exhibitions for the Jewish Art Salon, and was the curatorial assistant for Spinoza: Marrano of Reason, as well as the co-producer of Jerusalem Between Heaven and Earth at the Jerusalem Biennale 2017. You can find her work in galleries and nontraditional art venues all across the boroughs.

Judith Josephis a Chicago-based painter, printmaker and calligrapher.  She is Managing Director of the Jewish Artists Collective – Chicago, a group of twelve artists who exhibit together, and teaches an Artists’ Beit Midrash.  She exhibits widely in solo and group shows, and has a thriving practice as a ketubah artist.

Cynthia Beth Rubin is an early adaptor of digital imaging, beginning the transition from paint in 1984. Rubin’s digital prints, videos, and interactive works have been shown on the ICC facade in Hong Kong, the Jewish Museum in Prague, the Cotton Club screen, the ICA in London, and the Jerusalem Biennale, as well as numerous international festivals, and her awards include multiple Connecticut Artist Fellowships, NE Foundation on the Arts, Memorial Foundation for Jewish Culture and more, and artist residencies in France, Israel, Canada, and Scotland.

Yona Verwer is a Dutch-born, New York-based multimedia artist whose works explore personal and collective identity, history, and kabbalah. Verwer’s work has been shown internationally at the Jerusalem Biennale, Amsterdam’s Troubled Waters, the Andy Warhol Factory, and the Holocaust Memorial Center. She has been published in 4 languages, including in the New York Times, the New Yorker, and Art Criticism. Verwer is the co-founder and director of the Jewish Art Salon, the largest contemporary Jewish visual arts organization.

David Wander is an artist and a story teller.He has been working for over forty years interpreting and reinterpreting Jewish folk tales, megillot, and biblical stories in a visual midrash format. His Haggadah in Memory of the Holocaust was shown in a one man show at Yad Vashem and published and shown in German through Humbolt University in Berlin. He has shown at Mobia Museum, Temple Emmanuel Museum, and the HUC Museum in New York. He has drawn the five Megillot, the book of Yonah, and the five books of David.

The Jewish Art Salon is proud to be participating in the Conney Conference on Jewish Arts at the 92Y, March 31-April 3rd, 2019.

JAS OPEN STUDIOS ZOOM PROGRAMS CONTINUE!
Yesterday we celebrated Tu B’Av, the 15th day of the month of Av, a time when mourning is turned into renewed hope and celebration. It is both an ancient and modern holiday. It marks the beginning of the period of spiritual preparation leading up to the month of Elul and the Days of Awe.
Tomorrow! Tuesday, July 6, 12 PM New York, 11 AM Chicago, 9 AM PT, 7 PM Jerusalem
Growing Up Jewish in India, edited by Ori Z. Soltes, features artwork by @sionaware The book, which will be released soon, offers an historical account of the primary Jewish communities of India, their synagogues, and unique Indian Jewish customs. It offers an investigation both within Jewish India and beyond its borders, tracing how Jews arrived in the vast subcontinent at different times from different places and have both inhabited dispersed locations within the larger Indian world, and ultimately created their own diaspora within the larger Jewish diaspora by relocating to other countries, particularly Israel and the United States.
"Cholent Is the Delicacy that the Lord Revealed to Moses". Image by Mark Podwal in "Hebrew Melodies", which the @Jewishreviewbooks calls "a treasure. Article here: https://jewishreviewofbooks.com/jewish-history/11059/dionysus-and-the-schlemiel/
The Jewish Art Salon is excited to partner with The Israelite Samaritans Project of the @yeshiva_university Center for Israel Studies in the creation of a unique exhibition, "The Samaritans: A Biblical People", which explores the Samaritans, their complex culture and religion, and their relationships with Jews, Christians and Muslims across time.
Tuesday, June 15, 12 PM New York, 11 AM Chicago, 9 AM PT, 7 PM Jerusalem
After the Flood ReGenesis.
Rachel Braun
Praying for Peace in Israel. Oil painting by @artwork_by_leah
Woman of Valor, Valeriya Khomar, Mixed media on canvas, 2019. @artvaleriyakhomar #happymothersday❤️ #motherhood #motherart #jewishart #jewishartsalonmembers
Chana Zelig @artistchanazelig
With immense sorrow, The Jewish Art Salon extends condolences to the families of the deceased, and prays for the speedy recovery of all the injured in Meron Thursday night.
Shabbat Shalom! Havdalah, Ali Shrago-Spechler, challah bread, steel, wooden dowels, 2016. @alishragospechler
Let it Burn, photograph, Yehudis Barmatz Harris @yehudisb.h "Fire is vital and also consuming, as are the teachings of the Kabbalah. "
Chesed Sha be Hod, Loving kindness in humility. From Judith Margolis' book on the Omer. Today marked the second Passover, for those who missed the Passover offering. It reminds us to give ourselves a second chance.
Shabbat Shalom! Alef-Bet poster, by Cindy Lutz Kornet. @artsoul18
"Loving-kindness in Endurance" From @st.soleil Judith Margolis' artist book on the Counting of the Omer. For anything to endure it needs to be loved. Day 22 of the counting of the omer.
VIDEO: Creativity in an Uncertain Time IX at https://youtu.be/JTouLXee-WI
Creativity in an Uncertain Time aired April 12, 2021.
©2021 Jewish Art Salon. All Rights Reserved. Email: jewishartsalon@gmail.com Mailing address: Jewish Art Salon 1392 Madison Avenue, UPS Box 192, New York, NY 10029-6914 USA
Loading Comments...
%d bloggers like this: