The director of the Museum of Underground Prisoners in Jerusalem has censored works from two exhibitions on view at the museum as part of the Jerusalem Biennale for Contemporary Jewish Art. The Jewish Art Salon, whose exhibition Jerusalem Between Heaven and Earth was curated by Ori Soltes, had to move five artists’ work to another venue, the Bezeq Building. Amsterdam-based artist Maarten van der Heijden’s Shoah art is among the censored works.

David Sperber wrote about van der Heijden’s provocative artworks, and about Helene Aylon’s exhibition, which he co-curated with Dvora Liss..

… “Van der Heijden’s works are created by digital means. At first glance, they are uplifting, beautiful, and pleasant. His series Grotesques (2010) with its bright colors, calls to mind Buddhist mandalas filled with repetitive forms and images. A closer look, though, reveals that the forms consist of complex and appalling images of naked bodies, all from photographs taken by American soldiers who liberated the concentration camps at the end of World War II”…

Afterword: For the Children, An installation by Helène Aylon

…”Whereas American Jewish feminist artists in the 1970’s and the 1980’s did not foreground their Jewishness but emphasize their gender identification in a collective movement, since the 1990’s, Aylon’s engagement with a critical stance related to her Jewish identity constitutes a ground-breaking, radical social avant-garde and sets itself a goal to effect changes in the Jewish religious world”… 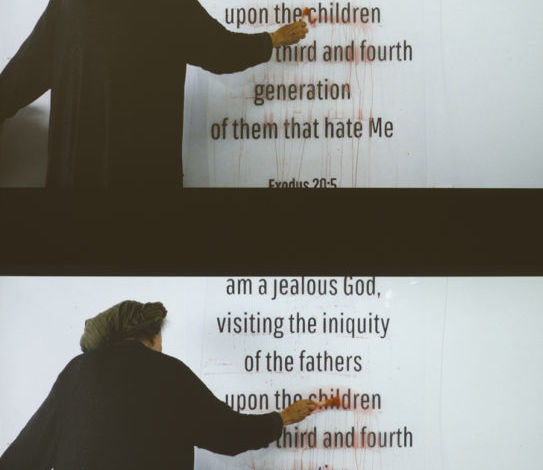 With the end of Yom Kippur, a Great Tekia is blown from the Shofar, and then we wish each other a Good Year.
Join the Jewish Art Salon as we continue a dialogue to explore the artistic process behind the work of three contemporary artists. In this session artists @ef4art , @gabriellaboros and Sandra Indig explore the process of re-creation: the deposits and richness of creativity that emerge from desolation and despair.
Last Sunday's JAS Zoom presentation featured @joelsilversteinart who showed us his exciting and totally original oeuvre based on biblical themes; contemporary look at the visual tradition of the epic and the evocation of the sacred. The artist’s family, friends and other autobiographical material are the inspiration for a complex Magic Realism. This creates an overlapping sense of myth derived from such diverse sources as dreams, cinema, Old Master painting, photography and comic books.
Last Sunday's JAS Zoom presentation by @jkejake whose antropomorphic art merges animals and figures in collages and streetart. His surrealistic art source late 19th century images.
Last Sunday's zoom presentation: Diana Kurz's artwork on animal rights through a Jewish lens.
Today at 4:30pm ET! Explore the exciting connections between art and architecture, ancient and modern, spiritual and utilitarian, and learn how transforming the environment through art and architecture creates change for societies and individuals.
The Jewish Art Salon wishes everyone a Sweet New Year, a year blessed with health, safety, and opportunity.
Sunday, September 5, 12 PM New York, 11 AM Chicago, 9 AM PT, 7 PM Jerusalem Our next live session AFTER THE FLOOD: ReGENESIS.
"Jewish Art Salon Zoom" painting, 8 by 8 inches, by @artwork_by_leah featured in her Jewish Art Salon presentation last Sunday .... on Zoom.
JAS OPEN STUDIOS ZOOM PROGRAMS CONTINUE!
Yesterday we celebrated Tu B’Av, the 15th day of the month of Av, a time when mourning is turned into renewed hope and celebration. It is both an ancient and modern holiday. It marks the beginning of the period of spiritual preparation leading up to the month of Elul and the Days of Awe.
Tomorrow! Tuesday, July 6, 12 PM New York, 11 AM Chicago, 9 AM PT, 7 PM Jerusalem
Growing Up Jewish in India, edited by Ori Z. Soltes, features artwork by @sionaware The book, which will be released soon, offers an historical account of the primary Jewish communities of India, their synagogues, and unique Indian Jewish customs. It offers an investigation both within Jewish India and beyond its borders, tracing how Jews arrived in the vast subcontinent at different times from different places and have both inhabited dispersed locations within the larger Indian world, and ultimately created their own diaspora within the larger Jewish diaspora by relocating to other countries, particularly Israel and the United States.
"Cholent Is the Delicacy that the Lord Revealed to Moses". Image by Mark Podwal in "Hebrew Melodies", which the @Jewishreviewbooks calls "a treasure. Article here: https://jewishreviewofbooks.com/jewish-history/11059/dionysus-and-the-schlemiel/
The Jewish Art Salon is excited to partner with The Israelite Samaritans Project of the @yeshiva_university Center for Israel Studies in the creation of a unique exhibition, "The Samaritans: A Biblical People", which explores the Samaritans, their complex culture and religion, and their relationships with Jews, Christians and Muslims across time.
Tuesday, June 15, 12 PM New York, 11 AM Chicago, 9 AM PT, 7 PM Jerusalem
After the Flood ReGenesis.
Rachel Braun
Praying for Peace in Israel. Oil painting by @artwork_by_leah
Woman of Valor, Valeriya Khomar, Mixed media on canvas, 2019. @artvaleriyakhomar #happymothersday❤️ #motherhood #motherart #jewishart #jewishartsalonmembers
©2021 Jewish Art Salon. All Rights Reserved. Email: jewishartsalon@gmail.com Mailing address: Jewish Art Salon 1392 Madison Avenue, UPS Box 192, New York, NY 10029-6914 USA
Loading Comments...
%d bloggers like this: